America’s infrastructure is close to failing.

So says the American Society of Civil Engineers (ASCE), which released its 2017 infrastructure report card earlier this month, giving the nation’s overall infrastructure a grade of D+.

Every 4 years, ASCE provides a comprehensive assessment of the nation’s 16 major infrastructure categories, using a simple A to F school report card format. ASCE assessed the categories based on capacity, condition, funding, and public safety. Mass transit received the worst grade, a D-. Roads and airports received a D, the same mark as in 2013. Railroads earned a B, the highest grade given in the report. Wastewater and public parks and recreation received a D+; bridges and ports received a C+.

Here are just a few of the eye-opening statistics uncovered in this year’s extensive report, available online.

Hope on the horizon

President Donald Trump has pledged to seek up to $1 trillion in new programs to rebuild our infrastructure. Last November, voters approved 72 percent of the ballot measures seeking to raise taxes at the city, regional, and state levels to pay for transportation, light rail, rapid transit, bike paths, and other infrastructure improvements.

Much work needs to be done. ASCE’s report card says it will cost an estimated $4.59 trillion to get the national’s infrastructure into relatively good shape by 2025.

To those outside of our industry, it may seem self-serving for the country’s civil engineers to point out infrastructure deficiencies. We civil engineers strongly believe it’s a matter of public safety necessity and quality of life for all. 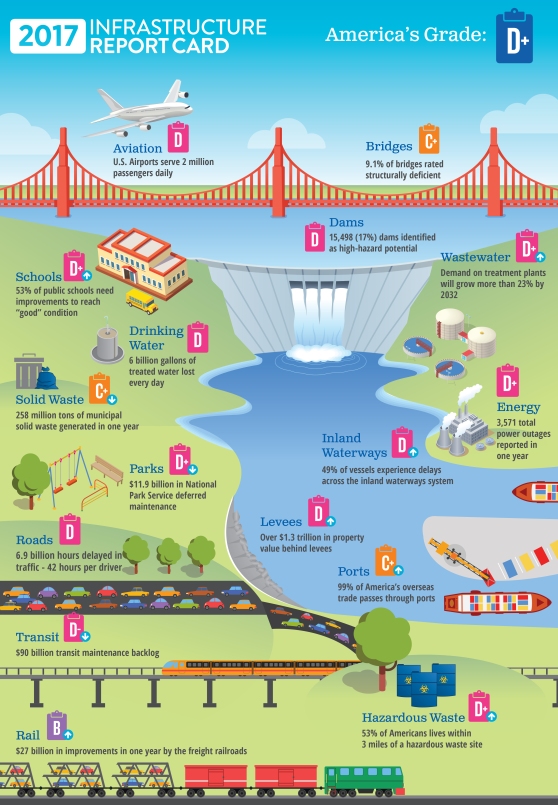 Infographic courtesy of the American Society of Civil Engineers.

All of our employees, from Indiana to Ohio and from North Carolina to Texas, pride themselves on delivering excellence, value, and exemplary customer service to our clients. As a company, we also place a high priority on improving the quality of life for our people and our communities. Making these “best-of lists” in Indiana and Ohio is a wonderful validation of their success and our staff’s satifsfaction level in serving our clients to the best of their abilities.

We will learn our final rankings on both lists in May. We do know that on the Indiana list, we are 1 of 19 honorees in the “large companies” category with 250-999 US employees. We can’t wait to find out where we place when the rankings are revealed.