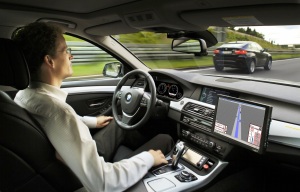 Google and university-affiliated research centers are working on fully autonomous technology for vehicles that would be able to drive between two locations without any operation by the occupant.

Such driverless vehicles would especially benefit persons with physical disabilities who are not currently able to operate a vehicle, as well as fleet operators, heavy equipment users, and the military, according to the May-June 2013 issue of The American Road & Transportation Builders Association (ARTBA)’s Transportation Builder magazine.

With an estimated 1.25 million annual fatal vehicle accidents occurring around the world, safety is another incentive for the new technology. The change would mean fewer crashes caused by human error, as well as the opportunity to increase highway capacity (more cars on the road) due to less physical gap between vehicles, greater residential and commercial development density along highway corridors, improved walking and biking options, smaller parking lots, and a shift in the design of office parks and strip malls.

The development process is advancing; however, it has not yet focused on the infrastructure that will ultimately be required to support this change in technology.  Understanding the issues and thinking outside the box will give infrastructure experts a decided advantage as this moves forward.

There is potentially room for transportation consultants to redesign and repurpose all parts of the highway system, including improving existing visual elements, such as lane markings, so driverless vehicle technology works more effectively. Other opportunities for work will involve gathering real-time data of work zones, congestion spots, weather, and passing vehicles, which will be collected and distributed electronically to improve the technology. Furthermore, cities that embrace this new technology will attract a greater share of new businesses and residents, contributing to their economic development.